X
This site uses cookies to enhance your online experience (amongst other things!). Read more about the individual cookies we use and how to recognise them by reading our Cookie Policy. Please click OK to indicate your acceptance to our use of cookies.
More Info
Accept Cookies
Free Delivery Available! - Orders over £60 including VAT - Excludes Highlands, Islands, NI and Europe
Menu
Accrington Stanley, Company News, Teesside

We call it ‘the Stanley factor’!

Sponsoring an iconic football club which can trace its roots to the founding of the Football League is bringing real benefits to a modern high-tech online retail business.

Accrington Stanley FC are enjoying a successful season, currently vying for promotion in League Two, with three games in hand on league leaders Northampton. And everywhere that Accrington play, thousands of fans on the terraces, thousands more reading match reports in newspapers, online and via social media, and hundreds of thousands watching televised matches see the name of their shirt sponsor, PlasticBoxShop.

“When I agreed to be Accrington’s shirt sponsor it was more about backing the club than anything else,” admitted Gary Lyons, founder and MD of the UK’s leading online retailer of plastic boxes for the home, office, schools and industry.

“But I’ve been genuinely and very pleasantly surprised at the positive impact it’s had on PlasticBoxShop, with sales up on average around 23% since the start of the current season. I can even find upward blips on the sales charts that correspond to when televised games and highlights are shown, and pinpoint increased sales from parts of the country where Stanley have had away games.”

Gary cites another recent example when two up-and-coming Stanley players signed for Rangers from next season. It caused a flurry of publicity in the Scottish football press, online and on social media, complete with pictures of the duo in their Stanley kit emblazoned with the PlasticBoxShop logo.

Back in the office, the sales team wondered why they were suddenly getting a surge of website hits, sales inquiries and online orders from customers in Scotland.

“We’re starting to call it ‘the Stanley factor’ in the office!” said Gary, who added that many of the new customers were businesses keen to benefit from bulk-buy deals and fast delivery times.

The deal with the Lancashire squad might seem an odd one for a business headquartered more than 70 miles away in Northallerton, North Yorkshire, especially given the traditional ‘War of the Roses’ rivalry between the neighbouring counties. It came about because Gary’s main supplier, based on the edge of Accrington, took over as the club’s stadium sponsor and persuaded the Yorkshireman to come on board as shirt sponsor.

“Wham brand plastic boxes, manufactured just outside Accrington, are our biggest seller and now the club play their home matches in the Wham Stadium, so there was an obvious connection,” said Gary, whose company is also promoted through perimeter boards at the home ground. 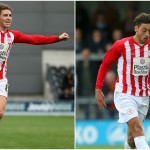 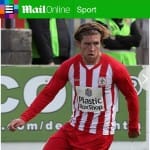 “I was a bit dubious at first, but as a football fan I was keen to support the grassroots game and I’ve certainly been won over. Of course it helps that Stanley are having a good season, but I’d say to anyone looking to promote their brand that backing a local team – whether it’s football or any sport – is good for the team and good for business too.”

Another bonus for Gary is that Leven Athletic, the team his son plays for in the Teesside Junior Football Alliance, now turn out in a replica Accrington Stanley kit, complete with PlasticBoxShop logo. Well, it’s good business to buy in bulk!