X
This site uses cookies to enhance your online experience (amongst other things!). Read more about the individual cookies we use and how to recognise them by reading our Cookie Policy. Please click OK to indicate your acceptance to our use of cookies.
More Info
Accept Cookies
Free Delivery Available! - Orders over £60 including VAT - Excludes Highlands, Islands, NI and Europe
Menu
Jesse McClure, Teesside

American TV star Jesse McClure was a hit with Teesside locals when he visited Preston Park Museum and Grounds.

Jesse, who stars in Storage Hunters and British spin-off Storage Hunters UK – the most viewed shows on UKTV’s Dave channel – is in the country to work as brand ambassador for North Yorkshire business PlasticBoxShop.

He visited Preston Park, at Eaglescliffe, to film a promotional video for the company, founded by Yarm couple Gary and Lisa Lyons. It involved riding a Segtech balance board around a slalom course, but deliberately knocking over stacks of the company’s new Wham Bam Boxes to prove how tough they are.

A crowd of locals and visitors gathered to watch the shoot and the charismatic Californian took time out to pose for photos and sign autographs. Jesse, who works in his family’s antiques business, also enjoyed a tour of the historic hall and museum, seeing some of its fascinating collection and visiting its Victorian Street.

“I had a great time at Preston Park, especially meeting the guys who turned out to watch the video shoot,” said Jesse. “But the museum was awesome too and the Victorian Street was like I’d just stepped out of a time machine.

“I love history and antiques, so visiting Preston Park was a real highlight of my latest trip to the UK.”

Jesse has signed the £299 Segtech board used in the video and plans to give it away soon in a competition on PlasticBoxShop’s Facebook page.

For a video of Jesse’s slalom challenge visit www.facebook.com/StorageHuntersKing For more about Preston Park visit www.prestonparkmuseum.co.uk and for more on PlasticBoxShop visit www.plasticboxshop.co.uk

Jesse had a swinging time at Preston Park Museum and Grounds. 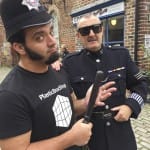 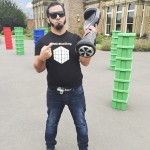 Jesse with the Segtech balance board which he will give away as a competition prize.