X
This site uses cookies to enhance your online experience (amongst other things!). Read more about the individual cookies we use and how to recognise them by reading our Cookie Policy. Please click OK to indicate your acceptance to our use of cookies.
More Info
Accept Cookies
Free Delivery Available! - Orders over £60 including VAT - Excludes Highlands, Islands, NI and Europe
Menu
Company News, Jesse McClure, Wham

If you want to box tougher than Tyson, more rugged than Rocky, then PlasticBoxShop has the answer.

The latest addition to its huge line-up of plastic boxes for the home and business is the super tough Wham BamBox. Manufactured in Britain as part of the leading Wham brand of plastic housewares, this tough customer is made from a new and virtually indestructible material that will see it last a lifetime.

PlasticBoxShop’s brand ambassador Jesse McClure, from hit TV show ‘Storage Hunters’ took that claim as a challenge, putting the Wham Bam Box through its paces. He stood on it, he pulled on his boxing gloves to punch it, he whacked it against a brick wall, he even parked a car it.

With hardly a mark on the Wham BamBox to show for all his efforts Jesse knew it was time to bring out the big guns… so that’s just what he did. He commandeered a British Army Tank, weighing it at more than 16 tons, and ran it right over a Wham BamBox!

At last the box had met its match, but even after being crushed under the tank tracks it sprang back into shape and was still recognisably a box, with a fitting lid. 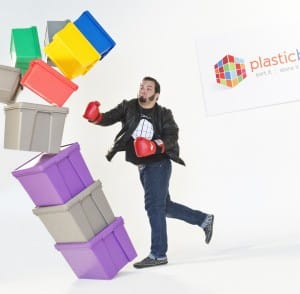 “I kicked it, I punched it, I punished it every which way, and I couldn’t make a dent. It took a British tank to get the better of the Wham BamBox!”

The new box is initially available in large 62-litre, medium 36-litre and small-16-litre sizes and in a range of colours. November will see the launch of 92-litre ad 24-litre variants and there will eventually be 10 size options in the Wham BamBox range, all with flush-fitting snap shut lids

Strength tested up to 400kg, the boxes are made from a new material specially developed to resist high impact damage, even at cold temperatures which make some plastics brittle. Manufactured in Britain, the WhamBam Boxes are available online from www.plasticboxshop.co.uk

“Many of our customers have enquired about tough boxes, especially if they are storing particularly heavy items or moving the boxes around a lot,” said Gary Lyons, Managing Director at PlasticBoxShop.

“This new range will have many applications both in the workplace and around the home. We supply many schools with storage boxes and we have already received enquiries from the education sector.”

PlasticBoxShop is the UK’s leading online retailer of plastic boxes for the home and business, with a huge range of boxes in all shapes, sizes and applications on its website, and with fast free delivery on orders over £50.

If you need to box something and be sure it’s safe and secure, you can rely on the Wham BamBox.